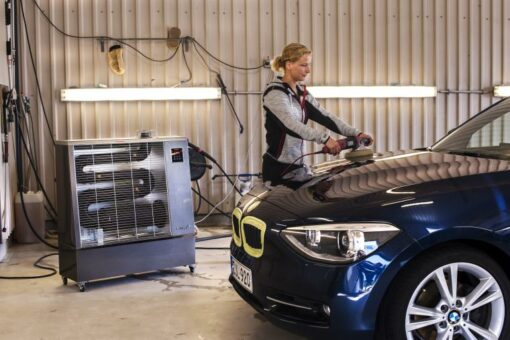 Fuel-fired large space heater – how much supply air is needed, and other questions.

How is it possible to have a large space heater without an exhaust pipe?

It is made possible by using pure high-quality fuel that ensures perfect combustion. Of the exhaust, more than 99% is carbon dioxide and water vapour that are parts of the air that we breathe. There is practically no soot or other fine particles, not even carbon monoxide. Exhaust from clean-burning high-quality fuel contains very low nitrogen oxide levels that do not constitute a health risk. To learn more, read this article.

Water vapour is in no way hazardous to health, and the moisture in the exhaust gas of Airrex infrared heaters does not harm the structures of the heated space.

There are two stages in warming up enclosed spaces, such as halls and warehouses: initial heating and continuous heating.

During the initial heating, the fuel heater blows or radiates heat at maximum power, producing the maximum amount of exhaust gases. Once the space is heated, continuous heating only requires a fraction of the heater’s heating capacity. In this stage, Airrex infrared heaters typically use only a small amount of fuel per hour.

Due to the two heating stages, the exhaust load in the heated space also varies greatly. Therefore, the ventilation performance required to ensure an appropriate amount of supply air and a level of carbon dioxide suitable for people to breathe varies.

The carbon dioxide produced by the heating makes working in the heated space more stressing. But when does it become a health risk?

Carbon dioxide is not dangerous as such, but large concentrations are considered harmful

Something about the level of stress caused by carbon dioxide on the human body can be deduced from the fact that submarine crews work and live in an atmosphere that contains approximately one per cent (10,000 ppm) of carbon dioxide. Even a concentration of 2%, or 20,000 ppm, has not been found to cause adverse health effects during short-term exposure.

How much does an auxiliary oil heater increase the carbon dioxide concentration in a hall space?

The specific weight of air varies according to the temperature and humidity of the air, the average used in these calculations being 1.225 kg/cubic metre (at sea level). Of this figure, the amount of carbon dioxide is 0.038% = 0.0004655 kg, or approximately 0.47 grams.

If we now presume that there is no ventilation whatsoever in a heated space with Airrex AH-300 infrared heater blasting away at full capacity, how big must the space be in order to avoid any health hazard due to the exhaust?

The four kilos, or 4,000 grams, of carbon dioxide produced per hour requires a space of approximately 710 m3to dilute below the 5,000 ppm concentration level. The area of a hall space that is four (4) metres high should, then, be approximately 180 square metres. Using the more powerful Airrex AH-800 for an hour at full capacity would require a hall space of approximately 1,150 cubic metres to keep the increase in the carbon dioxide level below the recommended 5,000 ppm limit.

Continuous heating requires only one-third or significantly less fuel compared to full capacity heating. This means that carbon dioxide emissions are only one-third or less by comparison. Subsequently, the volume of the heated space only needs to be 230–380 m3 to keep the carbon dioxide level below the recommended workplace exposure limit. The floor area of a 2.70-metre high hall space with a volume of 230–380 m3 is 85–140 square metres.

The significance of ventilation

The above examples are theoretical in nature because there are not that many heated spaces that are completely sealed. On the other hand, a combination of a particularly low ventilation setting and use of a fuel-fired heater will result in continuously increasing indoor air carbon dioxide levels, something that should be considered. If the heated space is ventilated in a normal manner in compliance with the regulations, meaning a complete air change per every two hours, the carbon dioxide level in the heated space cannot rise to a harmful level under any circumstance.

The high efficiency with which the fuel-fired Airrex infrared heaters utilise and burn fuel means that normal ventilation arrangements are enough to ensure recommended working conditions. To circulate ten cubic metres of air, you only have to operate an overhead door once.

Even if an overly high level of carbon dioxide in the air does not constitute a direct health hazard, symptoms like headache and fatigue should be considered as a reason to check for sufficient ventilation. The effect on the heating costs is not significant enough to justify compromising workplace comfort.